skip to main | skip to sidebar

We are back. Well, we're not sure if EBC is officially back but Emma wants us all to return and work on it a little more so here we are! For your blogging pleasure! Today we are doing a little "feature" or whatever you would prefer to call it on Taylor Swift. She is absolutely amazing and an inspiration to us all so we would like you to have some of the inspiration:
CLICK HERE!!
Enjoy and have a nice day. Hopefully we will be back with some poems and MAYBE an update from Emma!! :)
Posted by Cassandra at 5:39 PM 2 comments:

Sorry, but we aren't going to continue with this blog, it will be deleted once we have a new blog. We will alert you once the new one is completed.
Posted by Cassandra at 6:48 PM 1 comment:

I have made a change on this blog. From now on, we are going to be doing several posts a day to make up for next days and then we can do more posts once those are up. Thanks for all the reading you are doing! We hope our new system is going to work. Toodaloo! Oh yeah, New Books! Yippee! OK, I have never posted anything on this blog so I have found a lot of good books.

Good Reads.com has recently done a vote on Best Teen Girl Books. Thousands of girls have voted on Twilight by Stephenie Meyer as number 1 (of course). So, I am gonna post a few of these top-voted books.

'Last year, Annabel was "the girl who has everything; at least that's the part she played in the television commercial for Kopf 's Department Store. This year, she's the girl who has nothing: no best friend because mean-but-exciting Sophie dropped her, no peace at home since her older sister became anorexic, and no one to sit with at lunch. Until she meets Owen Armstrong. Tall, dark, and music-obsessed, Owen is a reformed bad boy with a commitment to truth-telling. With Owen's help, maybe Annabel can face what happened the night she and Sophie stopped being friends.
In this multi-layered, impossible-to-put-down book, Sarah Dessen tells the story of a year in the life of a family coming to terms with the imperfections beneath its perfect facade.'

Number 15 Uglies by Scott Westerfeld
Tally is about to turn sixteen, and she can't wait. Not for her license -- for turning pretty. In Tally's world, your sixteenth birthday brings an operation that turns you from a repellent ugly into a stunningly attractive pretty and catapults you into a high-tech paradise where your only job is to have a really great time. In just a few weeks Tally will be there.

But Tally's new friend Shay isn't sure she wants to be pretty. She'd rather risk life on the outside. When Shay runs away, Tally learns about a whole new side of the pretty world -- and it isn't very pretty. The authorities offer Tally the worst choice she can imagine: find her friend and turn her in, or never turn pretty at all. The choice Tally makes changes her world forever.
And many more...
Visit the webpage

It's Been A While

Sorry it's been so long since we last updated you. We are not doing our library due to technical problems but the rest is still the same here! We would like to post the book ICE by Sarah Beth Durst.a> 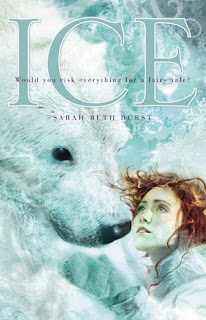 A story that is opposite of a prince saving his princess as a girl goes out to save her true love.
Such a good read and it really should get onto one of the top 'Gotta read this' list.

Sarah Says:
"ICE is a YA fantasy novel set in the present-day Arctic. It's about a polar bear, true love, and one girl's impossible quest across the frozen North.

I wrote this book as a love letter to my husband. It's about true love... the kind of love where you'd go east of the sun and west of the moon for each other. So this novel is very closed to my heart.

It's also about polar bears, one of the coolest animals ever. No pun intended."
Posted by Cassandra at 6:19 PM 1 comment:

We have created a Live Journal account. See it here! No book posts today unless Madison or one of the other authors posts. BYE!

-EMMA
Posted by Cassandra at 12:22 PM No comments:

Seattle Times Book Editor, Mary Ann Gwinn, reported Seattle's title as Most Literate City of 2009! The survey by Central Connecticut State University put Washington D.C number 2 on this list along with others.
Seattle was also first at # of bookstores per 10,000 people

This city is giant! No wonder this came to be!! Anyway, this has been

These books are a must-see and so is Maggie's website!

Deirdre, a gifted musician, finds herself infatuated with Luke, a mysterious boy who enters her life, at the same time she discovers she's a Cloverhand—one who can see faeries. Trouble is, Luke is a faerie assassin—and Deirdre is meant to be his next mark.

In this sequel to Lament, faeries follow James and Dee to Thornking-Ash, where James struggles with his feelings for Dee and for the dangerous faerie muse, Nuala. When Halloween plunges both Dee and Nuala into danger, James finds he can only save one.

AND, here are the websites Maggie S. visits!:

Verla Kay's Children's Writers & Illustrators' Board: A busy forum for children's and young adult writers—a great resource to find out more about the business of getting published and the craft of writing.

And many more, check 'em out at her website!
Posted by Cassandra at 10:51 AM No comments:

How many books have I read since I found EBC? Far beyond what I can count. Thx EBC!
-Riley